The day after the Paris attacks, a state of emergency was declared in France.

As a result, civil liberties were restrained and exceptional police powers were dedicated to regulating the movement and residence of the public. The state of emergency was promulgated by the French Assembly for a period of three months beginning on November 26, 2015. Demonstrations planned in Paris for COP21, such as the November 29 climate march, were banned. In this constrained context, what demonstrations by civil society related to COP21 were covered by media?

Our brief case study analysed media coverage from six online players which are Vice, Buzzfeed, Huffington Post, Le Monde, Le Figaro and Reporterre, so respectively three ‘new players’ of online news, two mainstream legacy media and one specialized in environmental questions. Our period of analysis ran from Wednesday 25 November until Wednesday 2 December and we gathered articles relating to climate change and COP21. 272 articles were collected in total. Among those, a corpus of 65 pieces of news (24%) were captured because their content was either referring to security measures around the COP21 (34 articles) or civil society actions (31). 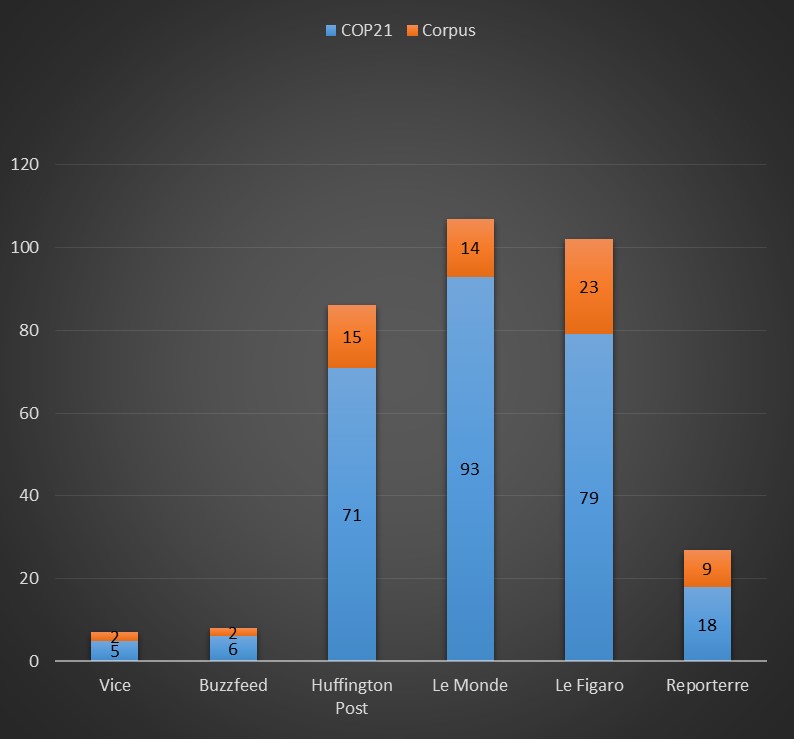 If we take a look at the distribution of the articles produced, we clearly see that Le Monde, Le Figaro and the Huffington Post produced most of the coverage. Altogether, they represent 80% of the media coverage of our sample. Part of this is related to their size since the two legacy mainstream media rely on large teams of journalists. Meanwhile, Huffington Post content is written by personalities and composed of a large number of blog/opinions pieces (a third of its content). To get a glimpse at types of journalistic production, we can label the content by the signature or absence of it in the article (see chart 2). This way, we divided our corpus in four categories: journalist, personality, press-agency and unsigned content. 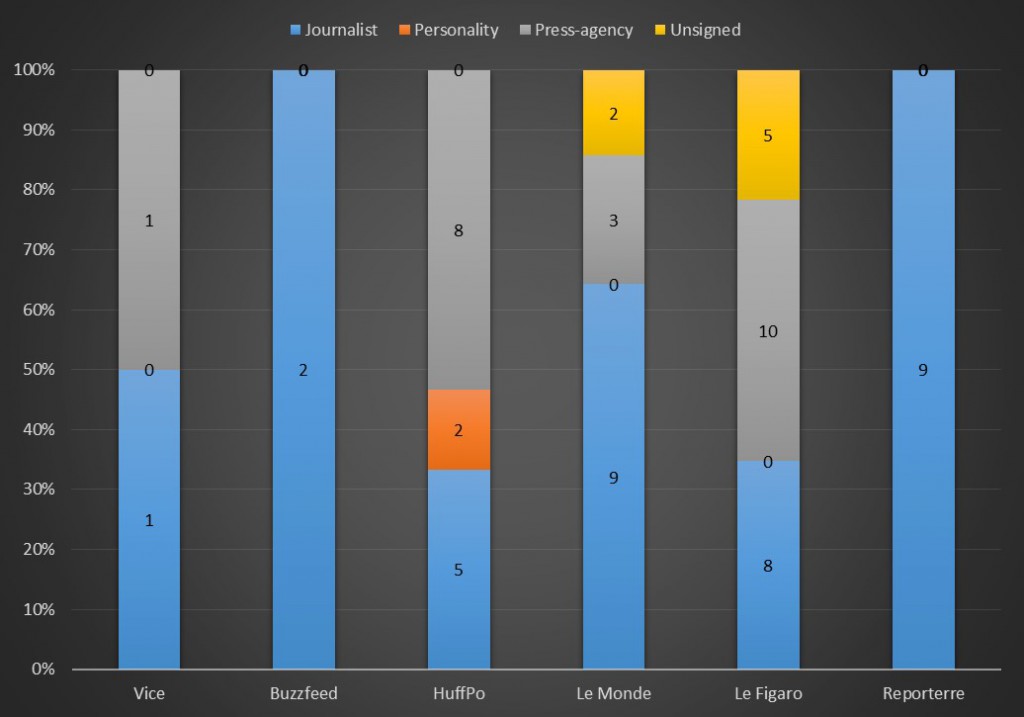 Going back to the re-partition of content produced in our corpus, we distinguished two main categories: civil society actions and security measures (see chart 3). The idea is to highlight the proportion of media coverage per media. As we can see, two of the ‘new players’ of the news online industry, Vice and Buzzfeed, have a coverage strictly focus on the security measures. They do not seem really interested in civil society actions. Also, this type of content dominate the coverage of Le Figaro, since more than two third of their content is interested in this matter. It could be an effect related to the quantity of press-agency articles (re-hash) contained in our sample for this title. As we can observe in chart 2, 15 of the 23 articles selected are either press-agency re-hash or unsigned.

Chart 3. Proportion of media coverage between civil society actions and security measures around the COP21 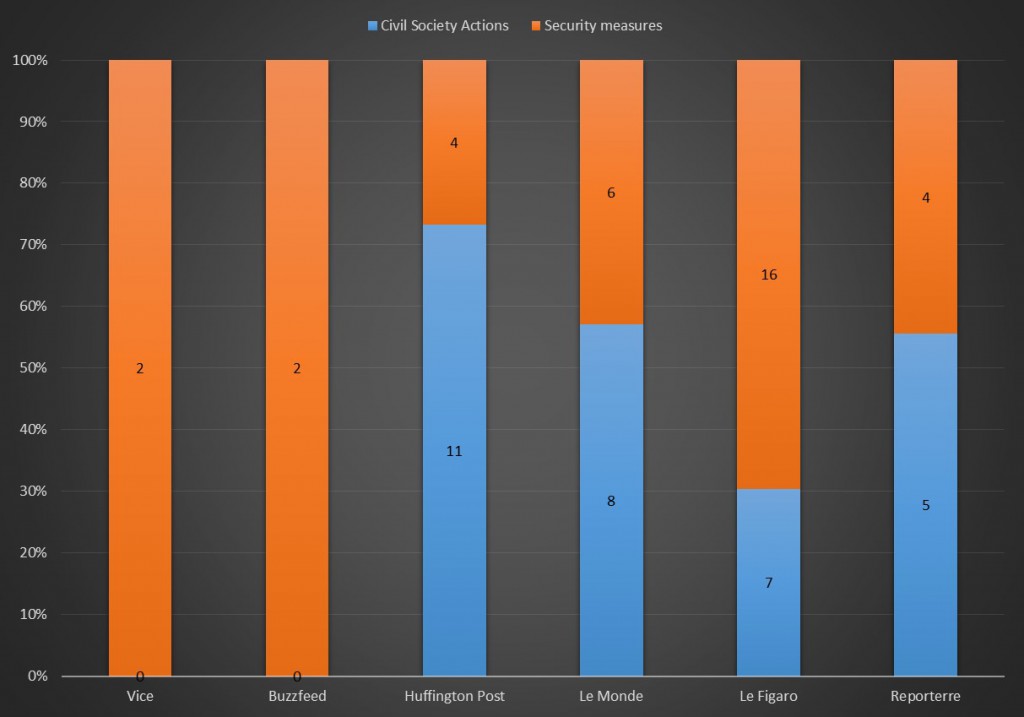 As we can see on the chart 4, the coverage is really unbalanced between the different news players. Globally, security measures and counter-actions appear to be the main sub-categories, since approximately a third of our corpus is represented by each one of them. “Violence” is just behind totalizing 15 articles and “advocacy for the actions of civil society” is the last sub-category with 11 articles.

What is interesting here is to take into consideration each media. Vice focuses exclusively on violence, even if there is only 2 of their articles in our corpus. Buzzfeed is a mixture between security measures and violence, with 2 articles as well. The four other players have different weighting between the sub-categories: the Huffington Post seems mainly interested in advocacy for the actions of civil society and counter-actions organized and less than the others by violence and security measures (only 25% of their coverage). The least interested in violence seems to be Le Monde (only 1 article), followed by Reporterre which gives a large place to counter-actions of civil society (44% of its coverage). Le Monde appears to devote the majority of its coverage to civil society actions as well, with not less than 6 articles dedicated to the counter-actions organized by civil society. Le Figaro has a coverage more oriented towards security measures, since it represents approximately 40% of its coverage in our corpus. We can draw the hypothesis that it might be linked with its political orientation and readers, who does not really seem particularly fond of environmental activists.

Chart 4. Proportion of coverage per media and per category 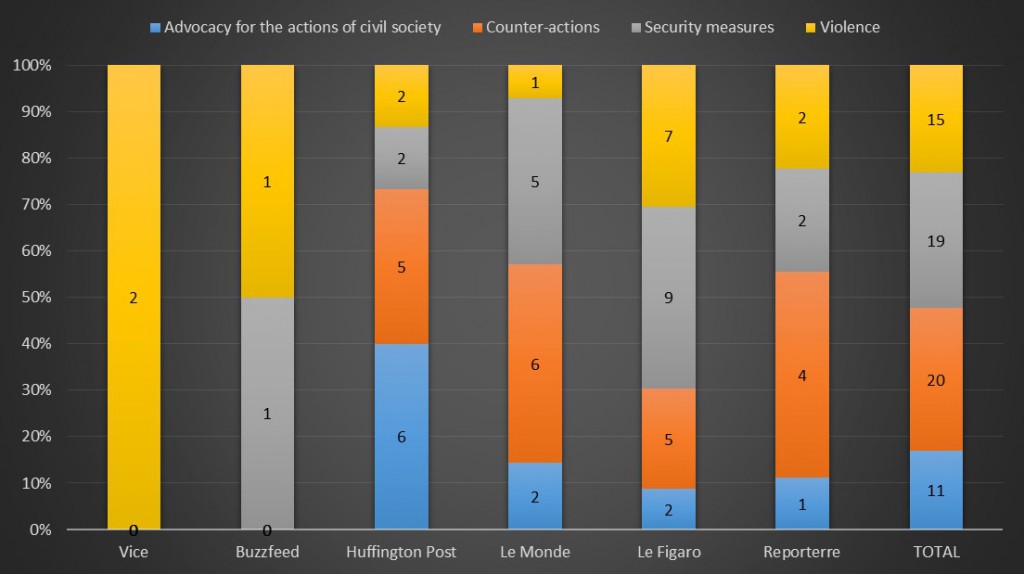 If we look now at the temporal dynamic of the media coverage, we can see how it evolved from a topic to another. The main thematic was security measures before the forbidden march of November 29th then it focuses on violence. Counter-actions seems less appealing to the media although they make good photos and videos to illustrate what is happening around the COP21. Another aspect not taken into account here is the format which could have maybe demonstrate this point. In this short period of a week, we can observe different media moments in a very condensed way (see chart 5). 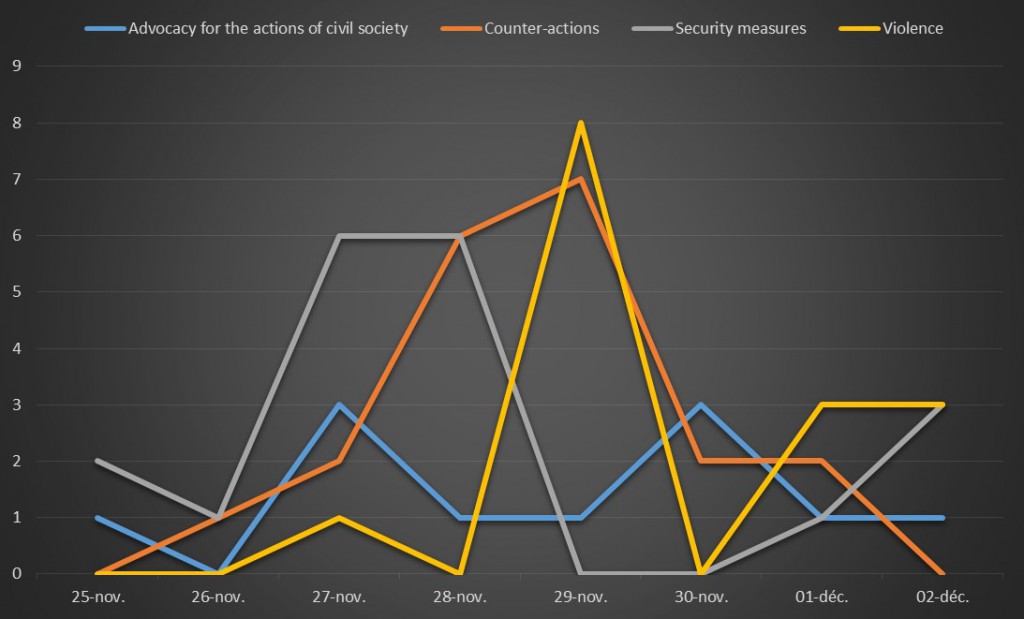 Of course, the approach developed here is very limited but it leads to many questions which can be dealt with in-depth. If we open what is a black-box for this (quick) quantitative analysis and do a more qualitative one, political stances might appear more clearly. For instance, Reporterre covers the violence and security measures but gives a voice to activists and relates police brutality with a critical lens, whereas it is less apparent – to say the least – in the other media. This example shows us what we miss with this kind of quantitative-only analysis. To go further, a carefully reading of each news piece is needed in order to find context elements about the history of the title and its position in the news field.

At first glance, Le Monde and Le Figaro seem to favour a stance of passing on government instructions on the ban of the march on November 29 and the necessity of respecting the state of emergency rather than detailing the motivations of civil society against the COP21. Vice and Buzzfeed which are considered as ‘new players’ and digital natives’ actors do not differ that much from the other news players. However, naturally their tone of coverage is different. The component of original media material in the coverage, especially for Buzzfeed, is also very light. They are focusing on violence, which can be linked to their business model which only relies on advertising. This could be a first explanation: they are chasing clicks and trying to maximize their page views with more visual content. In that regard Huffington Post might be the most surprising in its coverage: it offers a lot of opinions pieces and also a more nuanced coverage than elsewhere.

This quick analysis raises more questions than it brings answers, nevertheless, if we refuse shortcuts in the interpretation, it might be useful to draw a first (raw) picture of media coverage about civil society actions and security measures.