A few days ago, at the end of March, it snowed! Having never experienced snow this late in Hamburg and with the knowledge that 2019 was the second warmest year on record after 2016, my first thought was: this must be the direct cooling effect due to the COVID-19 induced industrial shutdown.

I felt a strange sense of righteousness, as if all climate change skeptics and politicians could now no longer deny the link between economic growth and global warming. This is of course an extremely oversimplified analysis; it is impossible to link two unexpected snow days in Hamburg with a global slowing down in industrial production . Moreover, climate change is a statistically significant variation in “average weather” over a period of 30 years, such that we cannot make any scientifically sound connections between a decrease in greenhouse gas emissions lasting but a few months and global warming.

Nevertheless, the economic shutdown has led to some directly observable environmental benefits.

The two most prominent examples are the clearing up of the canal waters in Venice, as well as the decreased air pollution over China. In more detail, NASA has reported a significant decrease in nitrogen dioxide emissions (a toxic gas emitted by vehicles, power plants and industrial facilities) during the quarantine period in the city of Wuhan (February 10-25) compared to before the quarantine (January 1-20). 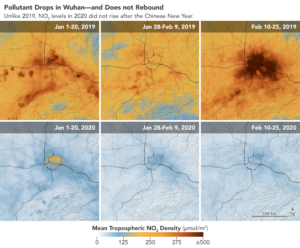 Moreover, the Center for Research on Energy and Clean Air reported that between February 3rd and March 1st, CO2 emissions in China decreased by at least 25%.

Less CO2 emissions lead to a weakened greenhouse gas effect, and thus reduced global warming. At a first glance, then, it seems that the economic shut down due to the Corona Crisis is good news for the climate. Analysts have said that if the trend of economic shutdown as in China continues globally, this will likely lead to the first fall in global emissions since the 2008 Financial Crisis. But what will happen after the pandemic, once we return to business-as-usual?

Below I have collected some thoughts that see the Corona Crisis as an opportunity to strengthen action against climate change, and some arguments that see the pandemic as a further relapse in the fight against global warming.

The Corona Crisis serves as a striking reminder of how vigorously emissions are tied to economic growth. While the sudden drop in greenhouse gas emissions will certainly please many climate activists, crisis-induced economic contractions are not a sustainable way to curb emissions. To quote Fatih Birol, executive director of the International Energy Agency, “there is nothing to celebrate in a likely decline in emissions driven by economic crisis because in the absence of the right policies and structural measures this decline will not be sustainable” . How policymakers respond to this recession will be crucial for the future of the climate change movement. Can we get out of the Corona and Climate Crisis without reinforcing the precise market logistics that got us into the healthcare and environmental mess in the first place?