During my research stay in Stellenbosch, South Africa, I came across an interesting arts project on climate change, which was installed during the cultural festival “Woordfees”.

A note on the wall invites onlookers to participate: to illustrate or write about what or who they would miss the most if our climate completely collapsed. Another note asked to describe fond memories of nature. 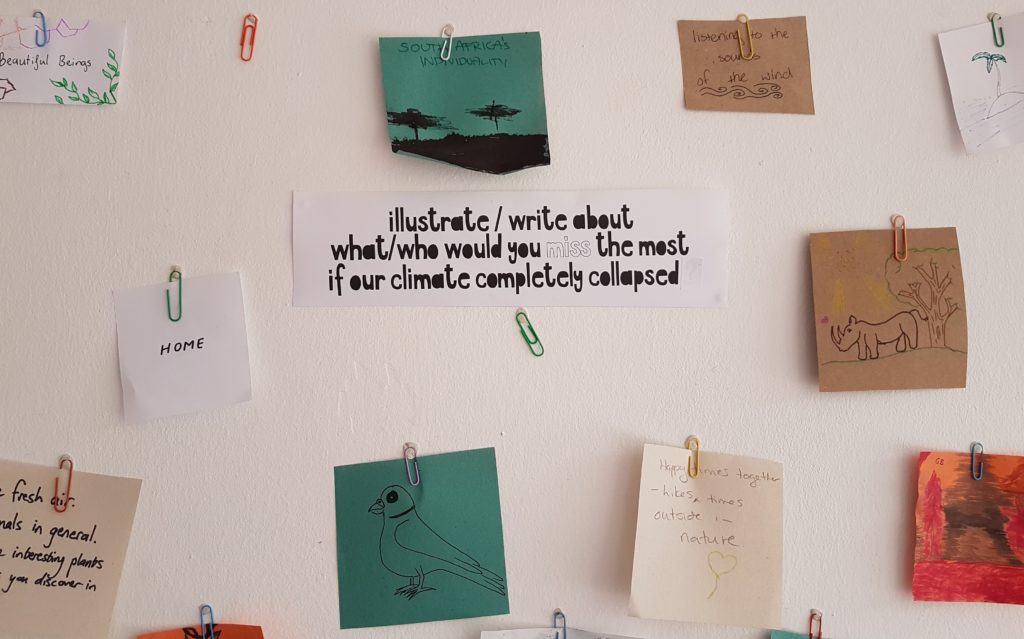 All around, people posted little notes and drawings, all of which gave interesting insights into their perceptions of climate change, especially their fears. 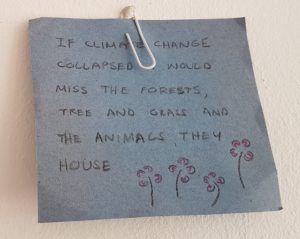 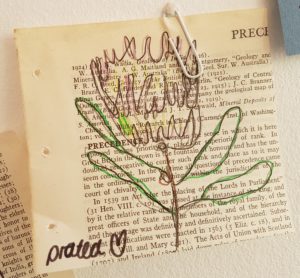 Only few participants think of social consequences – most concentrate on their previous nature experiences. The answers range from very general comments about “nature” or descriptions of forests and animals to very specific and regional aspects of nature like “protea”, which is a flower representative of typical vegetation in the Cape region and also South Africa’s national flower.

Not all answers match scientific projections about possible consequences of climate change, but some accurately describe for example that drought will be one of the most serious consequences South Africa faces. Rain plays an important role in some of the notes, one describes “the smell of rain” (also known as Petrichor, by the way). 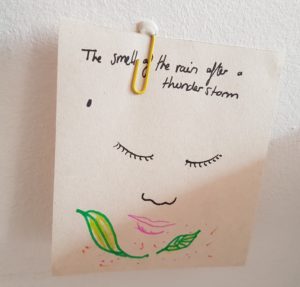 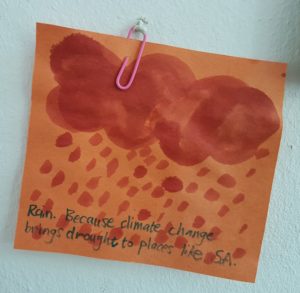 The project was initiated by Erin Johnston, a third-year Visual Communication Design student at Stellenbosch University. I did a short interview with her about the project’s background.

Climate communication needs to reach out to people’s emotions

Erin says she was inspired by research about “Nudge Behavioural Science, where positive reinforcement and discrete messaging or design features have the ability to change the behaviour of individuals and groups”. The project is thus based on the finding that there is an important connection between our emotions and how we behave.

Erin: “The intention is to use people’s happiest memories and what they would miss the most to motivate why they should fight to preserve the planet.” She was further inspired by Richards’ Landscape & Memory (2011), where he quoted Ellan Meloy, who said:

“As we unravel the threads that bind us to nature, as denizens of data and artifice, amid crowds and clutter, we become miserly with these loyal and exquisite guides, we numb our sensory intelligence. This failure of attention will make orphans of us all.”

“For the most part, people are no longer associating themselves with nature and thus cease to care about it. He talks about how many climate action initiatives fail because they fail to tap into sensory intelligence. Most people logically understand the importance of nature – it provides oxygen, we need water to survive, etc. But nudge behaviour scientists have proven that we use System 1 (the part of the brain that is emotional/ intuitive) to make decisions, not System 2 (logical, evaluative).”

The project is not yet finished, so it is hard to evaluate the results, but so far Erin is happy with the almost 200 entries. “It’s also really interesting what people interpreted ‘complete climate collapse’ to be.”

I personally found the project to be a very good way to engage people emotionally in the topic of climate change. Since everyone is trying to preserve what they love, this might be one pathway to interest in and action for climate protection. The project is also a good example how climate change can be “domesticated” from a global, abstract, distant problem into something that is relevant to the direct personal surroundings and to everyone.

When Erin has finished the collection and sorting of all entries, she will “create a logo and an animated logo for a platform based on this information” and also ponders some other form of publication – we will hopefully follow up with the results. I think it would also be interesting to compare the results with entries from other regions or other age groups like children or elderly people. How would you respond to Erin’s questions?

Erin says: “If anyone has something that they would like to contribute to this project such as an idea, story or photograph, they can contact me.” You can reach out to Erin via Email (21608881[at]sun.ac.za) or follow her on Instagram (@erin_johnston_).