My twitter account has slowed down during the second week of COP21. Was it because no one had new stories to tell from Paris? Did my contacts all leave the conference? If so, with what feelings?

As person that hasn’t been to the summit and therefore was unable to directly pick up the notion of the conference, I am going to write down my thoughts gathered from reading the news coverage and features during COP21. I have been overwhelmed with all the information coming from Le Bourget, through seemingly endless media channels – news, features, background stories, blogs, tweets and so on.

At this conference, the pressure on countries to act has increased. This time the media convey more than ever, that climate change is an issue and Paris an opportunity that requires more attention than in the past years. Almost a decade ago, I did an internship at the German Greenpeace headquarter. At the time some colleagues had started working on a climate refugee report, which back then, sounded like science fiction to me.

Unfortunately our world has changed a lot and we are now facing multiple major crises: climate change, refugee and terrorism intertwining into a perfect storm. For the first time at a COP, all countries seem to be ready to have a conversation about how to shape the future’s energy production and consumption.

Rather than relying on national leaders however, civic engagement appears to be providing the more promising momentum among all international efforts to reach binding pledges below the 2 degrees Celsius warming limit. Earlier last week on this media watch blog, Professor Hans von Storch wrote, “Six years after Copenhagen we continue on our high-speed train into the abyss.” I like this metaphor but have to add, if it only was a train and not an SUV running on fossil fuel, we would definitively be moving closer towards our climate pledges.

A lot has been written about media coverage of climate change during the conference on this blog and elsewhere in countless forums, tweets and opinion pages. I read some personal experiences from COP21 attendees that brought tears to my eyes because the way those people wrote about the urgency of what is at stake with climate change, how it will affect us, and in which way we as individuals have to start changing our behaviors toward more sustainable energy consumption really touched my heart.

Looking at the counts of our Media and Climate Change Obsevatory (MeCCO) project here at University of Colorado Boulder, we can clearly see that the attention for climate change has gone up and down over time but never came to a halt.

Some of the biggest events connected with climate change (such as the Stern report and Al Gore’s An Inconvenient Truth in 2006/2007, the COP 15 in Copenhagen in 2009, the US-China agreement on climate change in 2014, etc.) show the largest spikes in coverage. We will be excited to see if the spike will be continuing throughout the month of December (our next update will be in early January 2016). MeCCO and other climate change communication observatories are a good start to monitor how much we actually communicate about the biggest challenge of our time. However, this only tells us the amount of media coverage of climate change, but not how or if media pursue a certain goal in their communication in terms of meaningful communication that speaks to people’s values. This is something I would be really excited about to systematically investigate in the future. 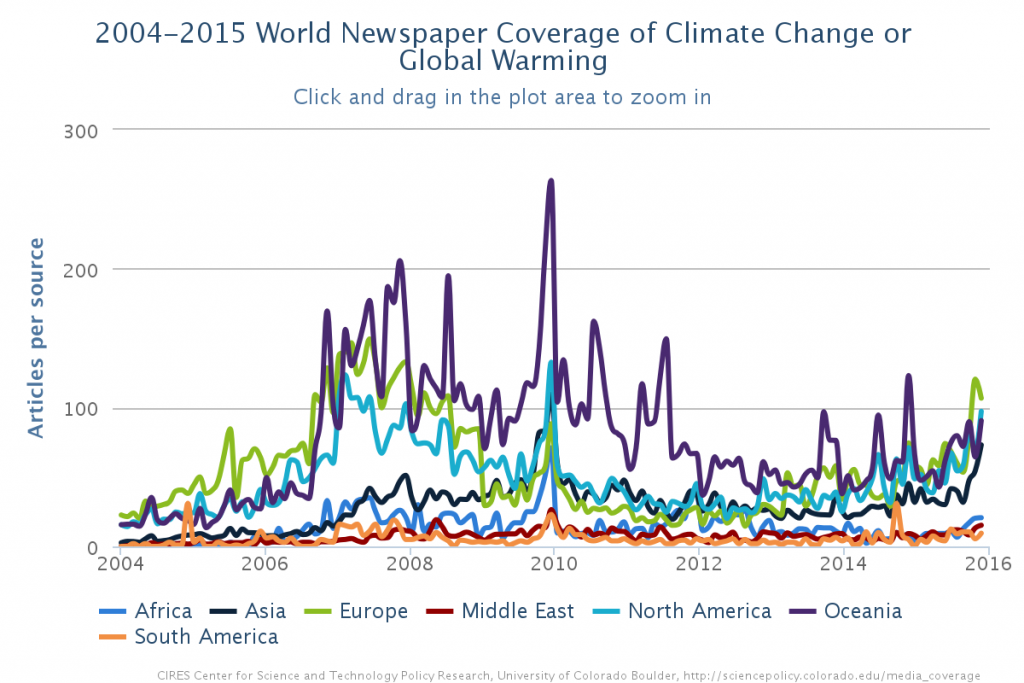 All of us that professionally deal with climate change on a daily basis (as scientist, politician, representative of civil society, etc.) cannot imagine the difficulty for laypeople to start with the big picture of climate change and zoom in to see how they can translate this knowledge into action. I have been researching psychological motivations behind individual climate engagement connected with media use for quite a while now. What I learned is that we need to see more than just information in the message (even though we all know about the text between the lines, we haven’t internalized this knowledge enough). It’s highly important that aspects such as emotions, rational arguments, social norms and directives for engagement are bought into media coverage. The latter two are especially important as aspects that influence our opinion-forming and decision-making.

This is why we need communication that is meaningful to people through accessible, emotional, reliable, informative, inspiring, creative and individually sense-making coverage. We therefore need to focus more closely on qualitative analyses of media communication of climate change to learn how information can make a difference on every level.