Shortly before 2020 is over, we will have a look back at 2019 to map the climate change debate as reflected transnationally on Twitter. Compared with the two years prior, 2019 showed a particular abundance of climate-related tweets: While the total tweets count of 2018 grew by 8% from 2017, the total count of 2019 grew by 70%. Then what triggered the climate discourse so much on Twitter that year? To explore this, we used our Online Media Monitor (OMM), which detects tweets containing either #climatechange, “climate change”, “global warming” or “Klimawandel” (in German). For the following analyses, we concentrated on tweets with at least five retweets, comparable to previous years (see posts for 2016, 2017, and 2018).

Looking at the most linked websites in our sample, we did not find much change compared to previous years: “The Guardian”, “New York Times” and the “Independent” continued leading (as in 2017 and 2018), followed by the BBC and CNN (see table). Interestingly, only “big players” of news organizations claimed the top 10 websites. This means that specialized climate change outlets – which led the previous top 10 websites – have now been pushed down (e.g. “insideclimatenews.org” was now ranked 22nd compared to being 5th and 6th in 2017 and 2018 respectively; “thinkprogess.org” was ranked lower than 60th after being 5th in 2018). We interpret this alteration as climate change becoming more of a mainstream topic in 2019.

Ranking of domains most linked to in tweets 2019. (Methodological note: Link shortening services such as bit.ly make it increasingly difficult to analyze domains, as they hide the real link.)

The most interesting outcome of our sample is the daily tweets activity. In the following graph, we marked the most “climate active” days on Twitter in 2019. Chronologically, the first peak occurred on March 15, when the first global climate strike took place in more than 120 countries. The event was initiated and promoted by the growing global climate movement (AKA Fridays For Future), which was inspired by the young Swedish activist Greta Thunberg.  The activist spirit seemed to have adhered as on April 22 people utilized the International Earth Day to tweet about climate change and the need to protect “mother earth”. Even former president Barack Obama tweeted his respect to the young climate activists all over the world, “leading the way in the fight to protect our planet”. He then added stories about his meetings with each activist around the world – Thunberg included. 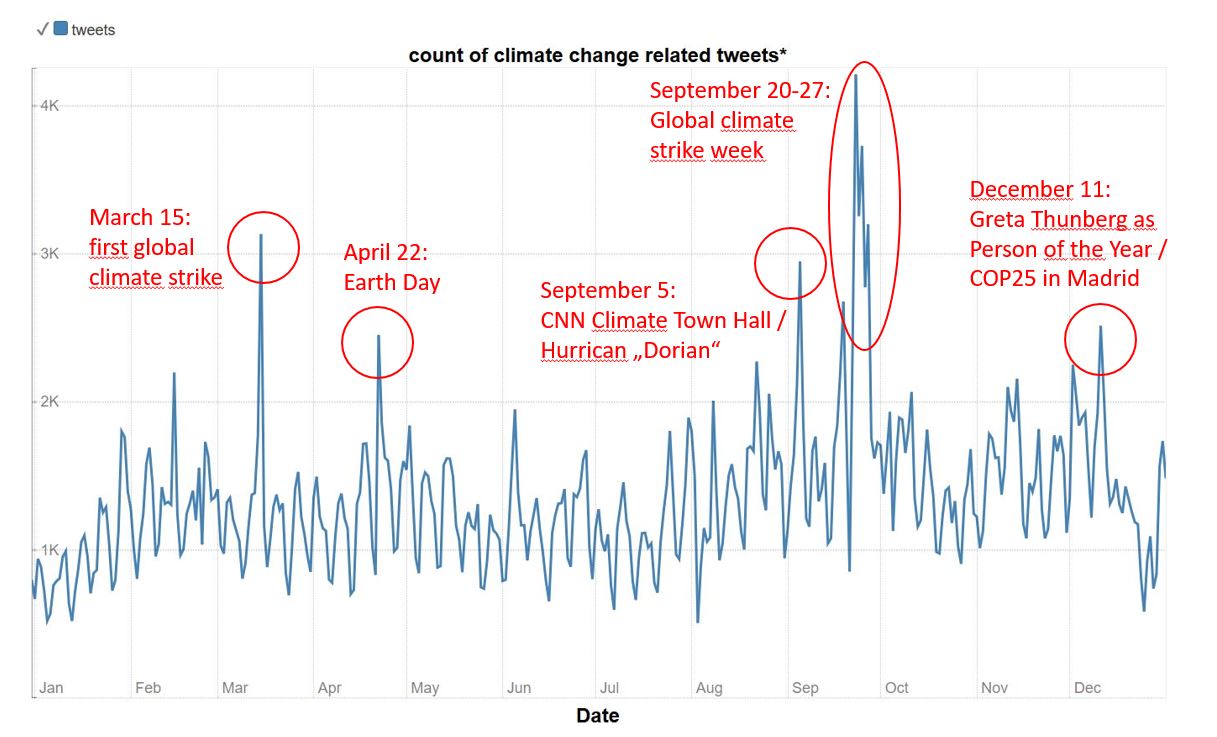 Later that year, whilst extreme weather events were overwhelming the American continent – the destructive Hurricane Dorian in the US and the widespread burning of the Amazon – on September 4th CNN aired an exceptional broadcast: a Climate Crisis Town Hall. During seven hours of airtime, ten Democratic candidates discussed their climate policy ideas and responded to the audience’s questions. Perhaps no wonder that on the following day our media monitor recorded a peak of almost 3000 tweets. Later that month, on the week of September 20th-27th, the huge global climate strike took place, bringing millions to strike for climate action across 150 countries. Despite temporary technical issues of gathering the data, we could still retrieve most of the Twitter activity of that week; such that September 19 to 27th depicted a “mountain range” of tweets in the graph. Particularly, September 23 marked an OMM new record with over 4200 tweets (the previous record peak occurred on October 7, 2018, when the IPCC special report on “the impacts of global warming of 1.5°C” was about to be released). 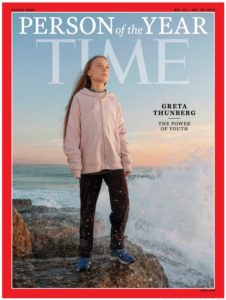 We tie the record peak on September 23 to the Climate Action Summit in New York – during which Greta Thunberg gave an infamous emotional speech, scolding world leaders: “How dare you?!”

In December our monitor recorded the last peak. Whilst Australia was fighting surging bushfires, on December 11 Thunberg gave another notable speech at the 25th Conference of the Parties (COP25) in Madrid. This time it was not as emotional but rather informative, rational and urging. Referring to climate activism, she said, “people who have been unaware are now starting to wake up; and once we become aware, we change.” On the same day, the prestigious Time magazine announced Thunberg as person of the year: a dramatized cover depicted her standing starkly on a rock, glancing far into the future, whilst waves crash at her feet.

We can see that 2019 was outstanding, characterized by global mobilization and high public attention to climate change. No doubt that after such an active year, the current one has sharply shifted away from climate issues. Amongst Covid-19, lockdowns, quarantines, economic crises, Black Lives Matter protests, election campaigns and tense elections – in our upcoming blog post we will explore which attention climate change did receive on Twitter in 2020.

Until then, stay healthy and keep tweeting for the climate.