Still very much in the midst of the COVID-19 Pandemic, 2021 saw climate change continue its fight for public attention. Although still not quite able to match 2019’s daily average tweet count of 1429, with an average of only 1237 daily tweets, 2021 did see the top 3 highest peak days yet. 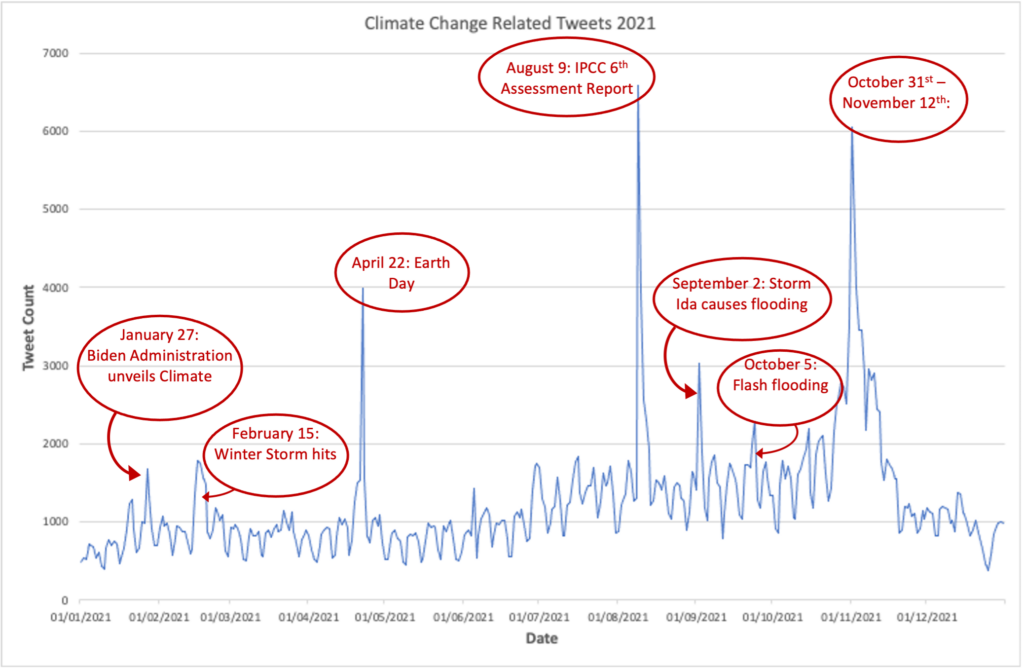 The year started with very low levels of attention to climate change, possibly due to attention being diverted towards the US Capitol riots. This could be another example of the “Crowding-Out-Effect” where a high level of attention to one issue ‘‘crowds out’’ attention to other issues. (Djerf-Pierre M. 2012a) Nevertheless, attention was revived as the Biden Administration formally took office and signed on to re-join the Paris agreement. Later this month, they also announced their new climate change policy which temporarily paused fossil fuel activity and sped up the transition to renewables.

This small peak in attention was followed in February by a peak of similar magnitude, corresponding to the winter storm that hit Texas that month. The extreme cold caused power outages and water & food shortages for millions across the state.

The first major peak of the year celebrated the annual ‘Earth Day’ on 22nd April. Compared to previous years, this was the highest Earth Day-associated peak yet, breaking previous records with an increase in Twitter activity of almost 150%. However, either side of this peak, activity remained relatively low.

A wave of extreme heat through north America slightly raised attention levels in July, potentially priming the public for the record-breaking peak observed on 9th August, triggered by the release of the IPCC’s 6th Assessment Report. The report was accompanied by a stark warning from the UN Chief that this was “code red for humanity.” While the report did give a depressing assessment of the future of the planet, the magnitude of this attention peak may also have been boosted by an already attentive public following the extreme heat wave of July, since it has been shown that attention to a topic can help to drive further attention (Djerf-Pierre M. 2012b).

As we moved into September, Hurricane Ida captured another peak in attention as it swept across north America leaving a path of devastation in its wake. A state of emergency was declared in New York as it was hit by ‘record rainfall and deadly flash floods’, with viral video footage showing floodwater pouring into a subway station. A similar fate was in store for London as ‘historic’ flash flooding hit in early October. 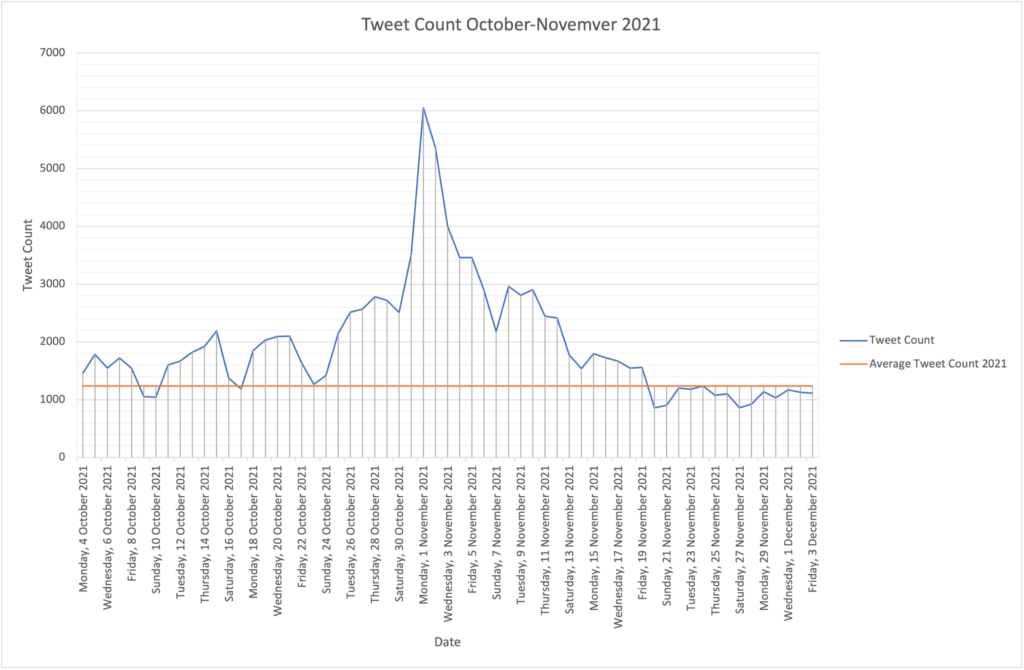 Both October and November saw noticeably higher attention than the yearly average as the world anticipated, watched, and then reflected upon the outcomes of the year-late COP26. This period brought the 2nd and 3rd highest ever peaks on 1st and 2nd November respectively.

In spite of this period of heightened attention around the UN conference, attention dwindled again and remained comparatively low for the rest of December. This may be an indication of “issue-fatigue,” where prolonged exposure to similar messages eventually results in an exhaustion of interest. (Djerf-Pierre M. 2012a)