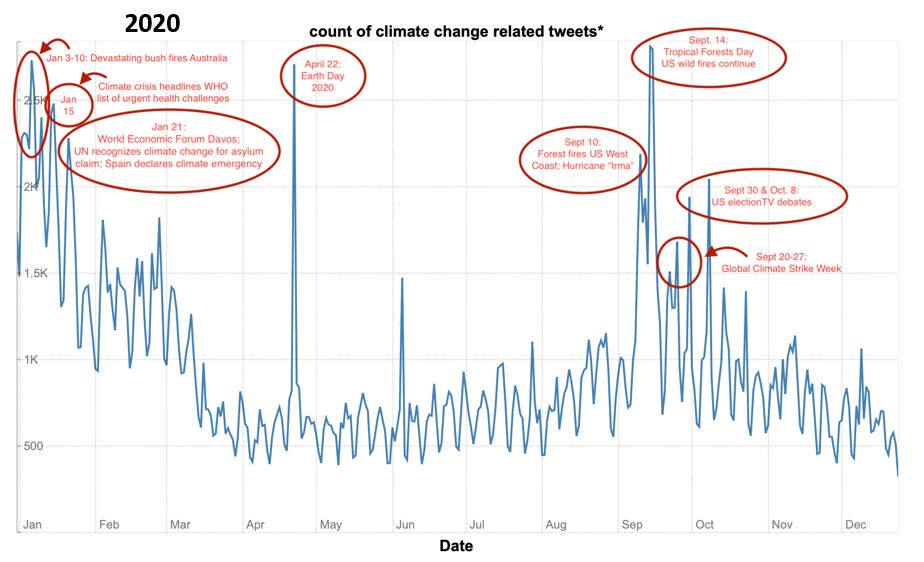 *The Online Media Monitor on Climate Change Coverage (short form: OMM) collects tweets related to climate change if they contain at least one of the search strings #climatechange OR “climate change” OR “global warming” OR Klimawandel and receives at least 5 retweets. Read the OMM Guide to get more details about the methods and take a look at the error log file to get information about server problems.

Regarding the natural event of devastating bush fires in Australia, there was an intense debate on Twitter concerning misinformation rumor that the cause was arson (Vox 2020). Later, several prominent actors called for climate action during the Golden Globe Awards ceremony, also referring to the bushfires.

The World Economic Forum in Davos, also in January, was the political event triggering the most Twitter attention for climate change in 2020. Greta Thunberg’s speech calling for immediate action in face of the climate emergency received a lot of attention, as did the more optimistic attitude symbolised by this tweet, sent by many different users: “By tackling #ClimateChange we’re harnessing the #PowerTo make a positive impact on the world. Thanks @BofA_News for keeping us informed on #WEF20.”

Then the world as we knew it changed and the global pandemic unfolded. When Covid19 dominated the news, attention for climate change fell to a low level – an exception was the annual “Earth Day” in April, when according to the ENGO’s press release “over 100 million people took action in 192 countries in honor of Earth Day’s 50th Anniversary” (Cision 2020).

In the second half of the year, natural disasters, the Global Climate Strike Week and US election debates put the topic of climate change on the Twitter community’s agenda. Other than usual, in 2020 there was no “December peak” as the UN climate conference had to be postponed to the following year.

The most active users – the accounts that posted the most tweets – in 2020 were either nonprofit organisations or individual activists, most of them already veterans in the field.

However, politicians outdid activists when looking at the responses their climate change related tweets received. The two most liked tweets in 2020 were sent by democratic US politicians: Joe Biden and Bernie Sanders both managed to receive almost 66.000 “likes” or “favourites” with their statements on successful climate policy.

As in previous years, the domains most linked to in tweets about climate change mostly belonged to traditional media organisations. The only domain in the top 10 that is neither a traditional media website, a link shortening service nor a platform belonged to Grist, “a nonprofit, independent media organization dedicated to telling stories of climate solutions and a just future”. The activist publishing organisation was already listed in the top 10 in 2018.

It will be interesting to see if, after hopefully the pandemic loses its present state of crisis, the attention for climate change on Twitter will remain at the current – but not unpreceded – low level, or if it will rise again to the heights of 2019.

Cision PR newswire (2020): The 50th Anniversary Of Earth Day Unites Tens Of Millions Of People Across The World In Action And A Multi-Platform Event. https://www.prnewswire.com/news-releases/the-50th-anniversary-of-earth-day-unites-tens-of-millions-of-people-across-the-world-in-action-and-a-multi-platform-event-301046887.html