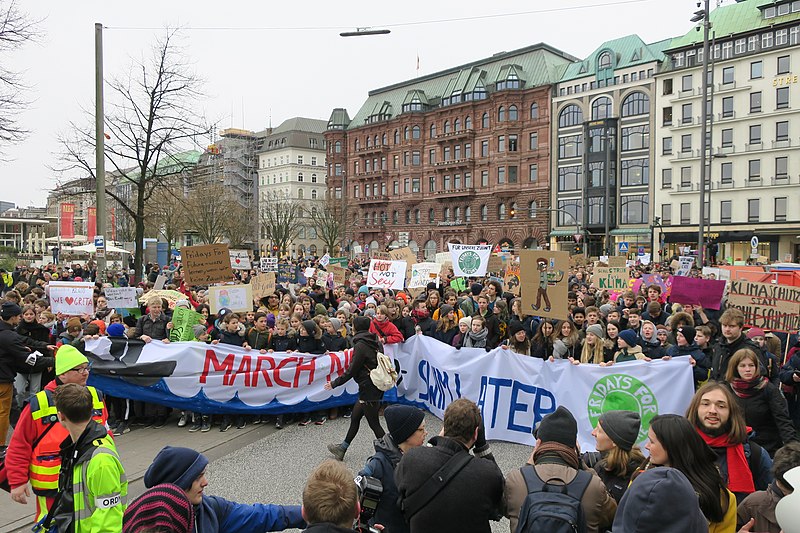 As Fenja and Michael earlier commented, the “Fridays for Future” movement is getting more and more media coverage in Germany. The climate strike is triggering many positive, but also nasty reactions, e.g. grown-ups insulting children in commenting sections in a manner you could easily find on any schoolyard [1]. However, in the same breath they want to delegitimize the student’s protest and brand it as naive or inconsequent. Nitpicking in the manner of “they were probably driven to the demonstration with their parents’ SUV” and pointing out other apparent inconsequent behavior of protesting students can be observed all over the digital social networks.

School authorities were the first ones to publicly comment on the matter by threatening students who skip classes to participate in the strikes with monetary fines for their parents.
Lately – and this might be boosting the media coverage considerably – high-ranking politicians have also been publicly commenting on the student’s strikes. The tenor here is clear: “How nice that you care about this topic, but now go back to school!” You can observe this within the tweet of Hamburg’s senator responsible for schools, Ties Rabe (SPD) [2], or the interview of Germany’s federal minister of education, Anja Karliczek (CDU) [3], and in many other cases. All of them place the focus on the fact that students are skipping school and are therefore violating compulsory school attendance. In this sense these functionaries pursue the aim of shifting the debate from climate inaction to blaming students by reducing the political motivation of the strike to the simple wish to skip classes. Overall, this only helps in covering their own inaction. The entire debate is a simple example of the “Yes, but”-narrative one can observe within the climate debate in Germany. Let me give you more examples to illustrate the concept.

We encounter a similar situation by looking at the (not surprisingly) disappointing report of the so-called “Kohlekommission” (committee of politicians, economists and NGOs that discussed the terms of a coal fade out), where you can condense the whole matter down to: “Yes, we have to stop burning coal, but maybe within the next twenty years (2038)” [4]. The fact that this “compromise” focuses mainly on corporate interests rather than the needs of millions of people in the Global South and thousands in danger of eviction in the mining regions is tightly entangled with this narrative. We can also apply this to the whole topic of Germany’s climate policy and climate goals [5]. “Yes, climate change is a threat, but we will still not even do enough to reach our own climate goals”, is yet another form of this ambiguity leading to dangerous climate inaction.

All the examples of “Yes, but”-reactions to climate issues have in common an apparent acceptation of the urgency of climate change, but still they illustrate the insufficiency of the responses. Furthermore, these reactions demonstrate how people who want to point out the obvious shortcoming are delegitimized and offended, some of them even put into jail for drumming in support of activists. [6] The responsible actors would probably call this “democracy” and “compromise” between different interests. However, they still fail to recognize that climate change is an urgent, global issue that comes along with an immediate need of action. They ignore or even accept the fact that all the climate policy approaches taken so far are no compromise for millions of people currently living in the Global South – or for future generations all over the world.

This blogpost is part of our series about current protest movements for more climate protection – see a list of all posts here.