Over the last two weeks, I tracked all tweets containing the keyword ‘COP21’ in their text. In total I captured 4’505’988. In terms of tweet volume it was a good start for the conference. On Monday the volume reached a first peak of more than 55’000 tweets in one hour (see Fig. 1)[1]. Twitter extra created new emojis for the Paris Climate Conference: Whenever a user used the hashtag #COP21 the logo was automatically shown in the tweet.

@twitter has created new emojis to mark the beginning of the UN Climate Conference in Paris. #COP21 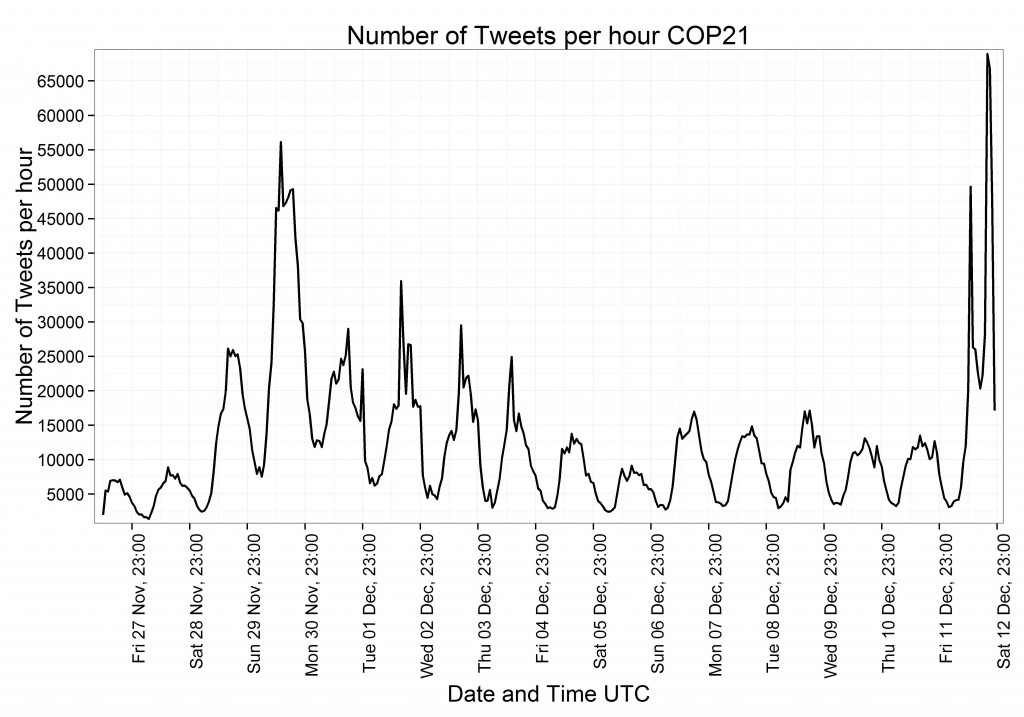 Two weeks between #climatemarch and #parisagreement

With such a large data set, many aspects can be analysed. As Warren Pearce has shown in his blog post, a typical analysis can focus on the hashtags being used in tweets. As a first step, I also focused on hashtags contained in tweets, but I was ranking them based on the number of unique users who used the hashtag. The number of times a hashtag appears in a tweet can sometimes be misleading, because a hashtag might be only used by a few bots (machine controlled accounts) that constantly tweet.[2] Not surprisingly #cop21 was the most used hashtag before #climatechange and #climate (see Fig. 2).

Fig. 2: Hashtag word cloud. The larger the hashtag, the more unique users have used it during the last 2 weeks. #COP21 as the most popular hashtag has been removed. 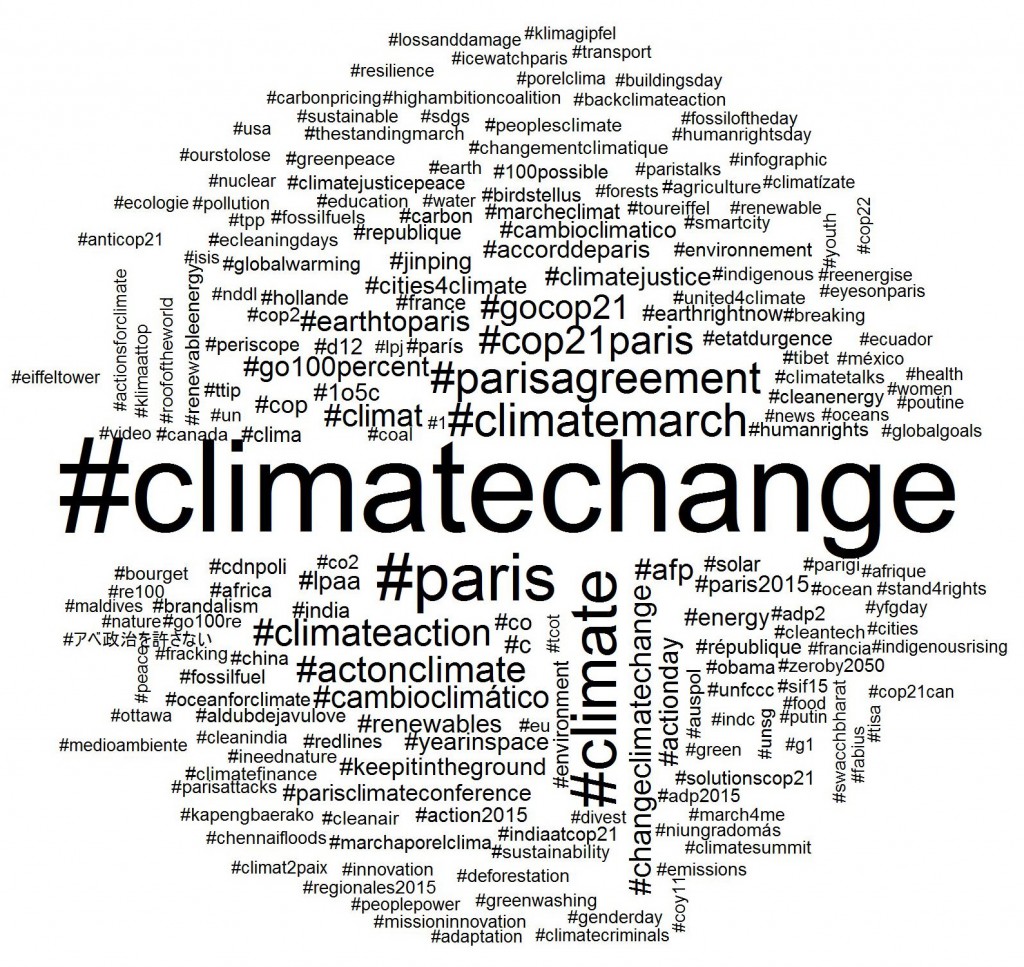 We can see above that #parisagreement and #climatemarch were used by a large number of users. Therefore, the next step in my analysis was to see when these hashtags were used.

Fig. 3: Hashtag volume per hour for the most used hashtags. #COP21 was excluded. 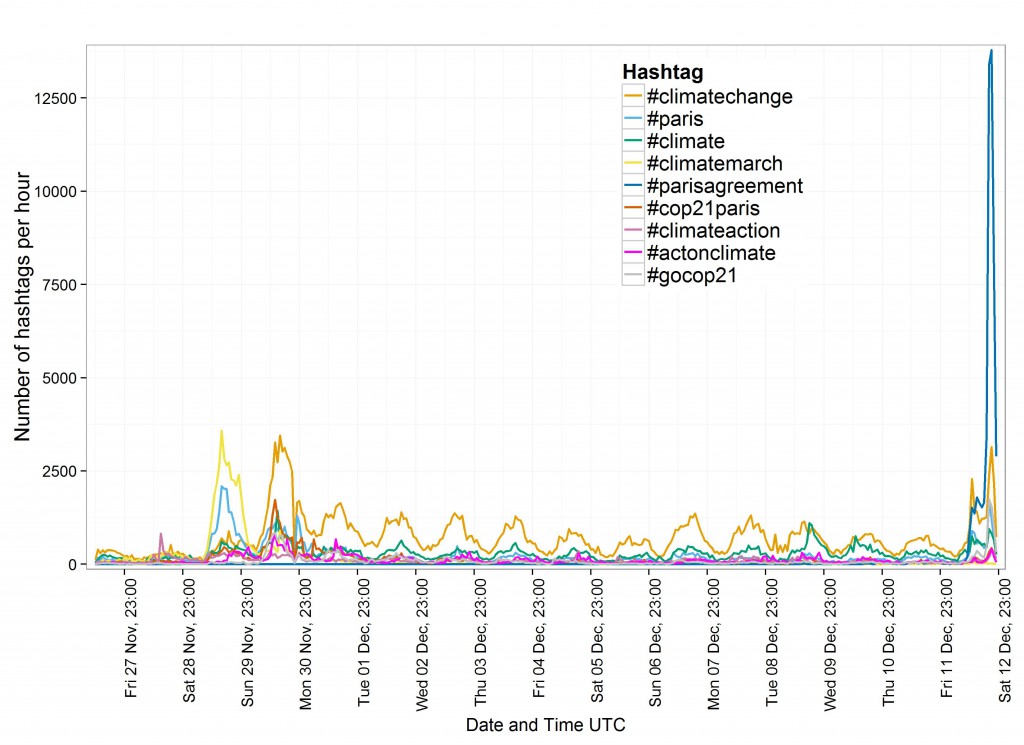 On the other hand #parisagreement was popular on 12 December when the first draft of the agreement was published and peaked after the announcement of the final agreement at the end of the conference.

Automatic replies from a bot

Overall most tweets were retweets (63.7%) followed by single tweets (29.7%) and replies (6.6%).[3] Only in the first week during specific hours replies had a higher volume than single tweets and retweets (see Fig. 4). On closer examination it becomes evident that most replies were sent from @COP21Direct an account extra created for a Twitter campaign: If enough users per day use #COP21 in their tweets a 3D printer in Paris would print the logo of COP21. 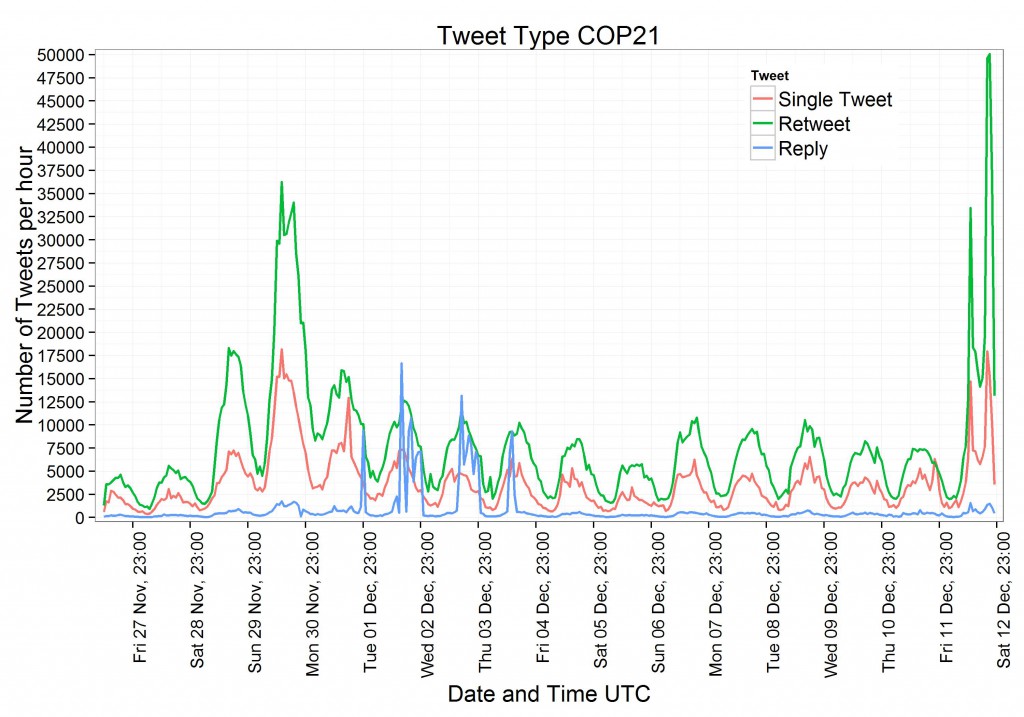 Among the most retweeted users were the usual suspects such as Leonardo DiCaprio, the White House, Narendra Modi, the Dalai Lama and François Hollande. None of them were the most retweeted though – that honour went to Scott Kelly an astronaut who currently serves as Commander of the International Space Station:

From space we are privileged to see the beauty of Earth but also our impact on it’s environment. #COP21 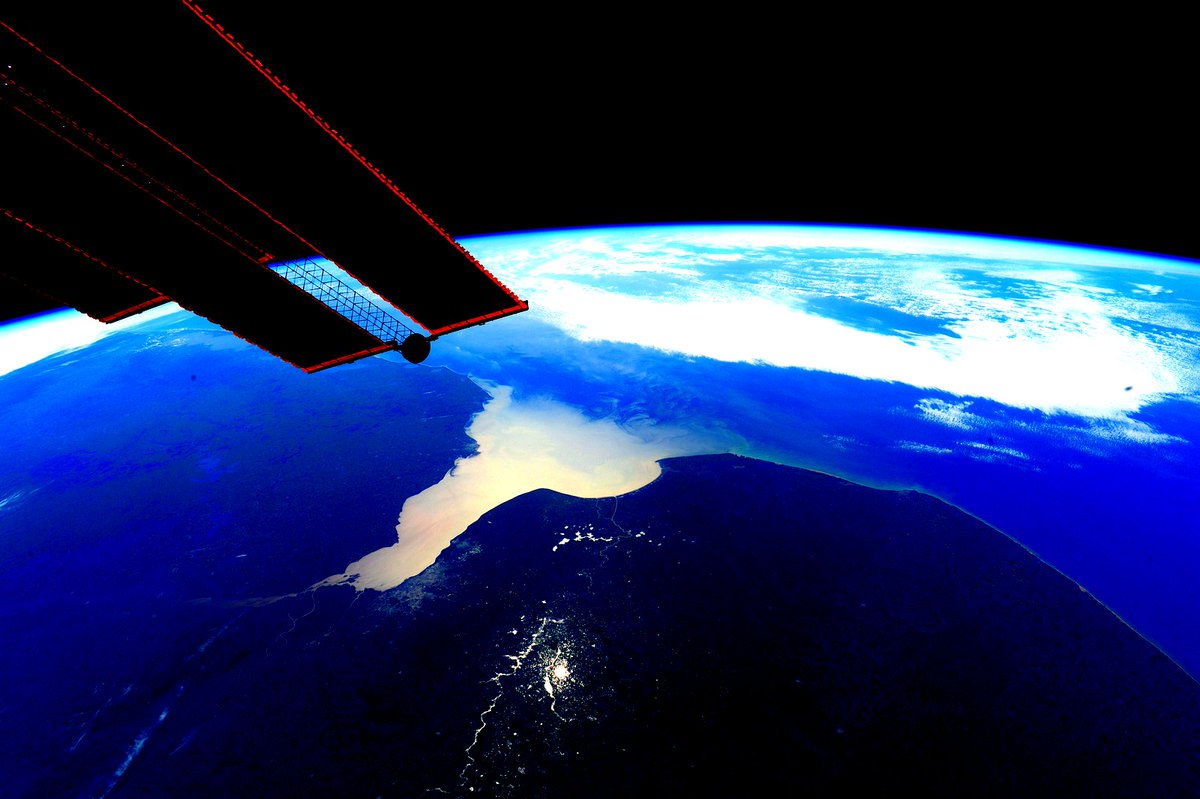 The second most retweeted was from a Japanese journalist who took a picture of a public ad in Paris: 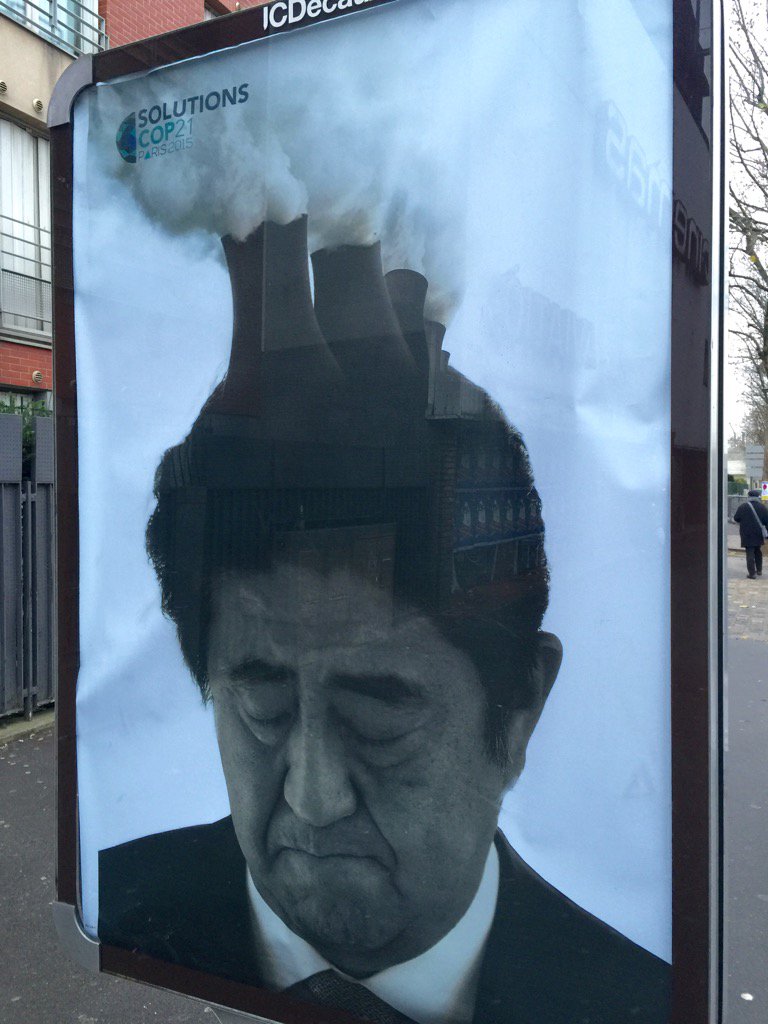 Some users quickly questioned if it is an official poster of www.solutionsCOP21.org, but the journalist thought it is a legit one, because it has the official logo of COP21 in the upper left corner. A user finally directs him to the webpage of Brandalism: artists in Paris used fake ads to protest against the corporate sponsorship of COP21. 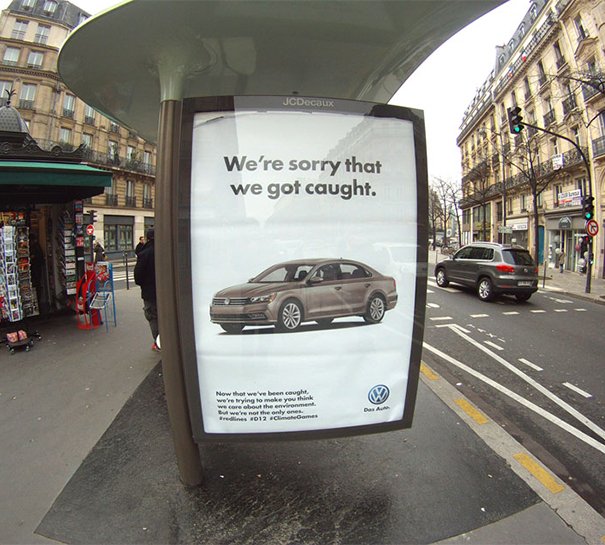 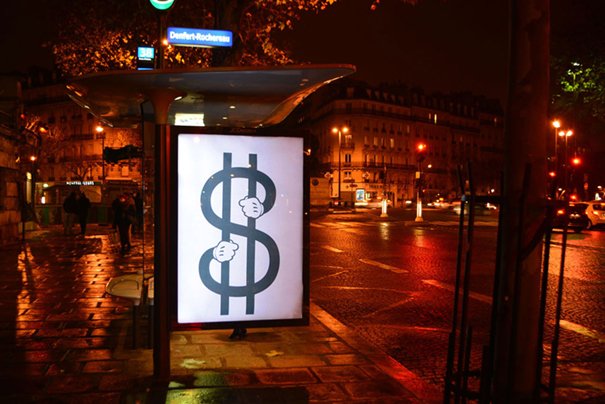 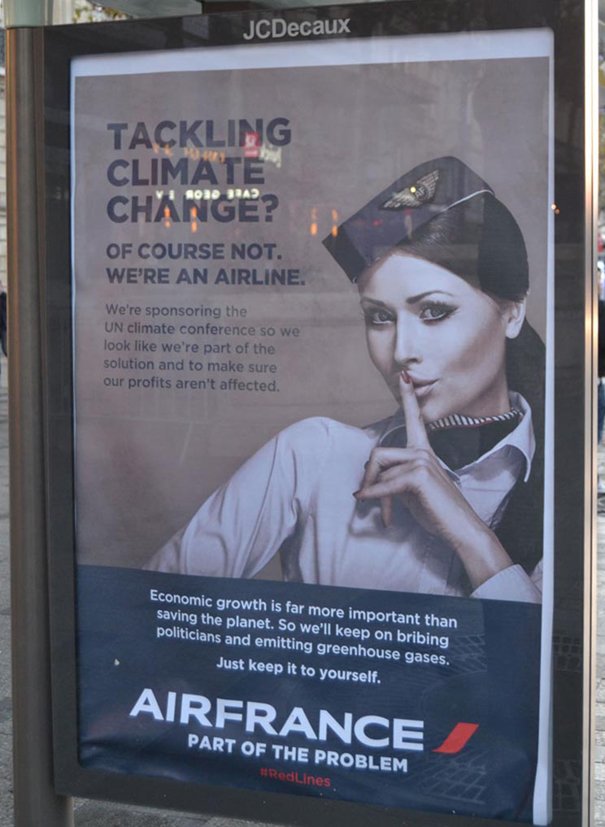 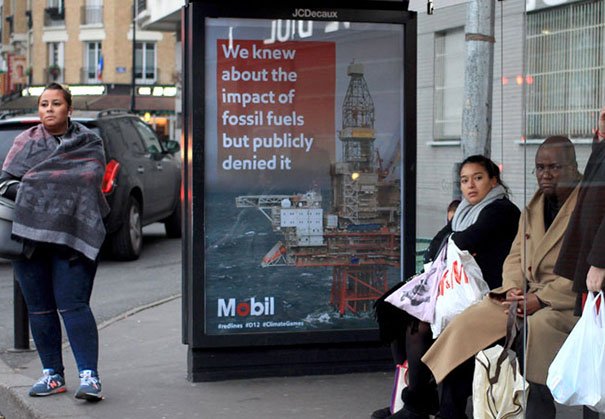 The analysis of the retweets already exemplifies the potential of Twitter to connect users around the world. In a next step I focused on the geo location of the users. The location of a user can possibly be determined with geo tags, but only few users are using them. In my data set only 0.1% of all Tweets contained a geo tag. Still, the location field in user accounts can be used to identify the exact location of a user. Users can freely choose what text they want to enter in this field. For every unique user (937’613) in the data set text from the location field was compared with a data base of cities and countries.[4] For 34% of all users the coordinates could be identified with this method (See Fig 4.).

Fig. 4: The denser the colour, the more users are from the same city or country. 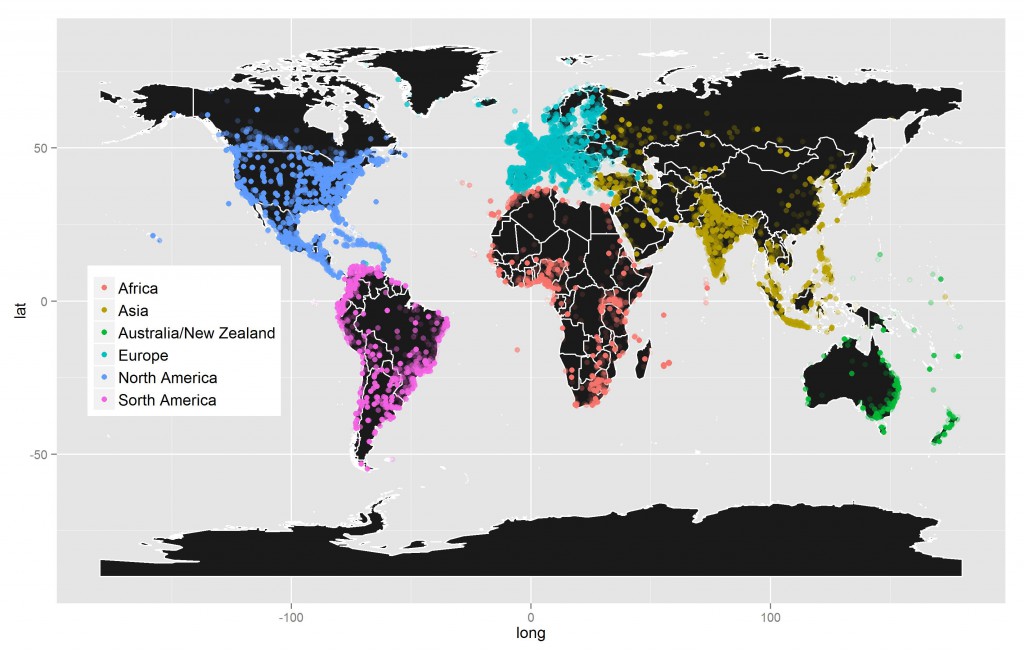 The analysis shows that users from all around the world tweeted about COP21. Around 16% of the users were identified from the USA, 15% from France and around 9% from the UK. Users from India (3%) were also well represented. Overall users from almost 200 different countries could be identified.

The same can be observed with the language of the tweets. Twitter automatically detects the language of a Tweet. Around 52% of Tweets are in English, 27% in French, 10% in Spanish and around 2% in Japanese.

First of all, Twitter typically reflects the real world events around COP21. The hashtags clearly indicated when the climate march took place and when the Paris agreement was finally reached. Secondly, during the event many different methods of digital campaigning were used such as live streams, flooding twitter with the help of bot accounts and online campaign pages asking users to send a tweet to leaders.[5] Thirdly, COP21 is also a global Twitter event: Users from all around the world were tweeting about COP21.  Nowadays it is even possible to send Tweets from outer space back to earth.

[1] The data collection, analysis and visualization in this blog post were all done in R.

[2] In my data set this was the case with #sassousi, a hashtag in reference to the Congolese president Denis Sassou Nguesso. The hashtag has been used 56’206              times by only 319 users. A good example of such a bot account is @JeVoteNon.

[3] The low number of replies in the data set can be explained with the sampling process. Tweets about cop21 often attracted replies but users writing replies usually did not mention cop21 again in their replies because the topic of the conversation was already clear. The same holds true for hashtags. Users use less frequent hashtags in their replies than in single tweets.

[4] This analysis is based on a modified version of code from Jeff Leek: http://biostat.jhsph.edu/~jleek/code/twitterMap.R

[5] WWF Indonesia for example created a page that helps to automatically generate a tweet in which a user can address a global leader. Such a page might be used for a good cause but it is a questionable practice an falls into the category of digital astroturfing.